The Piddington Cider Alchemists met in mid May and pronounced the new season’s cider ready to go – still dry, but not as sharp as our first year’s cider at this stage. We have put this down to using a higher proportion of eating apples in our mix and of course the strict controls that were in place for the Piddington Appleation Contrôlée.

Make sure you have Saturday 7th October in your diary for the next Piddington Apple Day and Harvest Supper when you will also hear plans for Piddington Wassailing.

A big thank you to everyone who helped to make the 2016 Apple Day and Harvest Supper such a success.


And of course you are all waiting to hear the names of the new vessels! The big fermenters, Tom, Dick and Harry, are joined by new boys Bert and Ernie, but let’s not forget Dave! The two shapely carboys have been named Fanny and Johnnie. The four demijohns have also been given names this year – all four seem to have been named by someone who can’t pronounce their r’s. Unfortunately they are Rufus, Roderick, Roger and Brian. (Don’t ask – I was out of the room at the time!)

Fermentation has started successfully in all of the vessels, hidden away in their top secret winter quarters. We have an added concern this year – the weight of the vessels and juice on the floor joists! See the photos below.
The Cider Alchemists are under added pressure this year. Last year we were pleasantly surprised that the apple juice made excellent cider, perhaps despite our best efforts. The general expectation this year is that we will succeed again. Don’t count your chickens!

I will keep you informed on fermentation, racking off and alcohol levels as things progress. In the meantime, enjoy 'Piddington Apple Day 2016 – The Movie!' on the Piddington Apple Day page, together with other photographs of the day and the evening.

Mid September – the start of our second season

Apples on the trees and plenty of windfalls already. We are nearly half way through our 2015 vintage cider and now it is time to plan for our 2016 vintage. 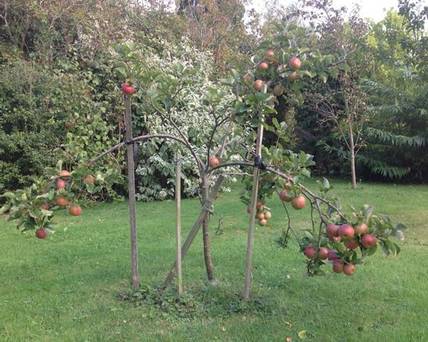 This little tree is really making an effort for Piddington's next Apple Day!
The cider has been enjoyed by regulars at the Pop-Up Pub and also at Village Hall events. ‘Goodbye Dick’ has all gone. ‘Harry’ was the second fermenter to be emptied. ‘Hello Harry’ is good, but not as good as we had hoped. We had expected some improvement over ‘Goodbye Dick’, given it has had a longer time to mature. That doesn’t seem to have happened and we are still scratching our heads! ‘Tom’ is still waiting in the wings.

We are particularly pleased with our sparkling cider and seem to have perfected the correct formula to produce this on a consistent basis. More Grolsch bottles are still required. A big thank you to a few people who set about emptying Grolsch bottles with great enthusiasm.

Plans are well underway for our 2016 Apple Day – Saturday 22 October at the Village Hall. Everyone is welcome to lend a hand washing, chopping, scratting and pressing. We hope to unveil our new village apple press and cycle-powered scratter, both of which are under construction. 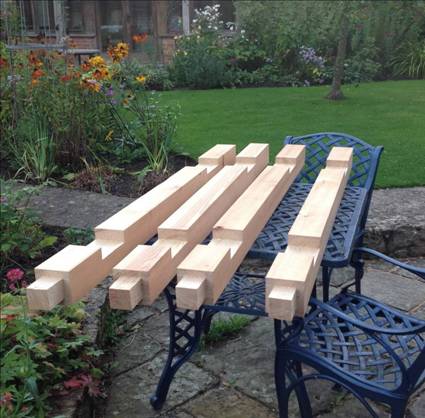 The press ‘uprights’ taking shape.
Please keep Saturday 22 October free in your diary – the day and the evening! Further news to come in ‘Upcoming Events’ later this month.

Yes, we now have Piddington Cider! For many months this heading was followed by a question mark. It has been difficult to sit patiently waiting for the cider to mature, but the results are surprisingly good.

Our first fermenter to be emptied was ‘Dick’, when the contents were transferred to 10 litre ‘bag-in-boxes’ and bottles for consumption at the Pop-up-Pub. Our first cider just had to be called ‘Goodbye Dick’.
‘Goodbye Dick’ has been appreciated by a growing number of cider drinkers at the May and June Pop-up-Pubs as well as at the Barn Dance. With a 7% ABV, it should be consumed in moderation.

After much experimentation, some failures and some refinements, we have also managed to produce bottled sparkling cider. We are still not sure if we can produce this on a consistent basis, so we have called this ‘Sparkle Surprise’ – it is still a surprise if it sparkles, but hopefully it won't be too often that it is a surprise when it doesn’t!

It will either be ‘Tom’ or ‘Harry’ to go next, when we should have sufficient cider for future Pop-up-Pubs. It is difficult to describe how it tastes – be there and try it for yourself!

The Cider Alchemists have been busy testing a few blends in an attempt to get a slight sparkle and a slightly sweeter taste for those who may not have too much enthusiasm for still cider. We have tried adding different quantities and types of sugar to encourage a secondary fermentation.  For this to happen we have to use a barrel or bottles that can withstand some pressure. Grolsch-style bottles with the flip top and rubber seal are the best. It is cheaper to buy full bottles of Grolsch lager than it is buy them empty. We would be grateful to any villagers who may be partial to this brew to donate their empty bottles!

While the cider still requires a few more weeks to mature, we have been pleased with our very early tastings. We managed to get quite a pop when we opened our first bottles, and a reasonable fizz. We noticed distinctly different tastes when using Muscovado and normal white granulated sugar. We plan further tests during the first half of April. Hopefully, avoiding any explosions and strange things happening inside the vessels, we will be ready to launch our early Piddington Cider in May.

Five weeks of nervously watching, testing and encouraging Tom, Dick, Harry, Dave and the demijohns. All have developed their own personalities. So much so that the demijohns are now known as Frank, Len and Reg!

The fermentation stage is now complete for the four fermenters. Tom was a very slow starter and we had to add some more yeast to get him going. We ‘re-pitched’ him, as we say in the trade! Dave was a little slow to start with but then suddenly had such a vigorous bubbling that he made quite a mess of himself and his siblings. The demijohns are still slowly fermenting.

The Alchemists have being checking the specific gravities and ph levels at regular intervals and have gradually developed an impressive grasp of cider-making terms. ‘How is the cider coming along?’ or ‘How are the boys?’ are becoming questions regularly heard in the village.

The cider in the fermenters was ‘racked off’ on the 24th November when the fermentation had stopped and the specific gravity had reached 1.000. ‘Racking off’ involved siphoning off the clear liquid from the ‘lees’. This is the sediment at the bottom of each vessel consisting of the apple residue and dead yeast. The fermenters were thoroughly cleaned and the clear cider was siphoned back into each fermenter. We lost about 15% of the starting volume in the sediment. The cider will now be left for several months to mature.

Yes, we can call it cider! The specific gravity measurements taking on the Apple Pressing Day were between 1.050 and 1.058. Having reduced down to 1.000 during fermentation we are able to calculate that the alcohol content is between 6.4% and 7.4%.

Now we have to wait until the spring to find out what it tastes like!

We need to keep the question mark in place for a good few months!

The juice is sitting in a warm, but secret location contained in four fermenters. They are under the care of the Piddington Apple Cider Expeditionary Force – Alchemy Platoon. The four fermenters have been named after that well known 60s group ‘Tom, Dick, Harry & Dave’! They are ably supported by the backing group ‘The Three Demijohns’.

As with this whole venture, we are taking advice but largely learning as we go along. All four fermenters will be treated in a slightly different way, in order that we may find out what works best!
We expect to lose some of the liquid over time due to racking off, evaporation, the odd tasting and explosions. With luck we may end up with enough cider to provide a challenge to the village drinkers. Please don’t get too excited, and prepare for a wait. The Piddington Alchemists are hoping that we may be able to celebrate Tom’s ‘coming out’ in the spring.

One September evening, under cover of approaching darkness, three members of Piddington’s Apple Cider Expeditionary Force set out on a fact-finding mission to Long Crendon.

We met Tim Soar, master cider maker, in the Eight Bells, consumed one or two glasses of his excellent cider and rapidly developed ideas and enthusiasm for our own Piddington pressing. We also visited his cider making operation at the very impressive Long Crendon Manor and agreed that in no way will we be ending up in competition!

Tim was very supportive of our thoughts on ‘giving it a go’ and was prepared to lend us his old crusher and press for a day for a very modest fee of buying some of his cider. (You may have sampled a glass or two at the September Pop-Up Pub in the village hall.)

We decided to make a start, with modest ambitions to learn as we go along and contain the news of any embarrassing mishaps to a limited number of ‘hard core’ enthusiasts.

The outcome – Piddington’s first Apple-Pressing Day was held at the village hall on Halloween, Saturday 31st October 2015. Our modest ambitions were exceeded ...