The north wall of the nave contains traces of a door that has been blocked in and covered with a 14th century wall painting of St Christopher. The image is very faint but it is possible to make out the saint, holding his staff, and a small chapel (possibly that of Ralph the hermit at Muswell) in the background. 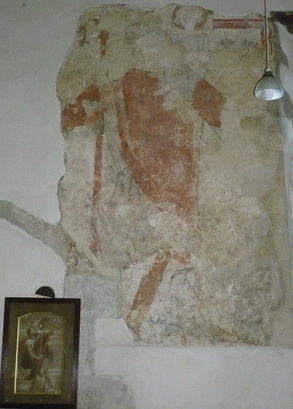 Wall painting of St Christopher, 14th century
The painting was discovered in 1896 and completely uncovered and restored in 1935 by E.T. Long of Oxford. It had been covered sometime in the 17th century with a thin layer of plaster on which was written the Creed within a scroll border. When the painting was restored in 1935, a small portion of the overpainted border was left at the top right.

It is presumed that the painting had been plastered over during the Civil War, 1642–45, to prevent damage by Parliamentarian troops who were besieging Boarstall Tower.

In the south wall of the chancel is a 14th-century double sedilia of a most beautiful and elaborate design. (‘Sedilia’ is the architectural term for a group of stone seats, usually three, that are set into the south wall of a chancel for the use of the clergy.)

Sumptuously carved with foliage and ballflower ornament, cinquefoiled arches, tall canopies and pinnacles, and fine crockets and finials, the sedilia is of a later date than the rest of the chancel, and is thought to have been removed from Missenden Abbey at the time of the Dissolution of the Monasteries and inserted into this older wall.

There is a third finial built into the wall over the priest’s door, which seems to show that the sedilia was originally threefold, and was reduced to double form to suit this small chancel. 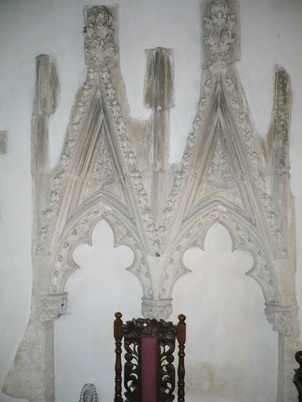 The piscina next to the double sedilia is also canopied. 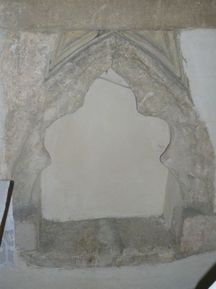 Opposite the sedilia, on the north wall, is a lovely little Easter sepulchre. It has Purbeck marble pillars and an arch ornamented with winged cherubs.

Like the sedilia and piscina opposite, the design and workmanship contrasts with the simplicity of the chancel itself. 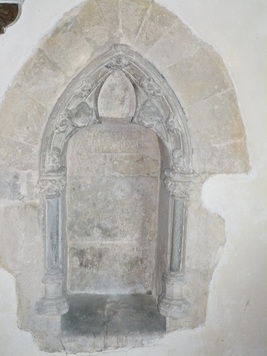 The octagonal chalice-shaped font is medieval. 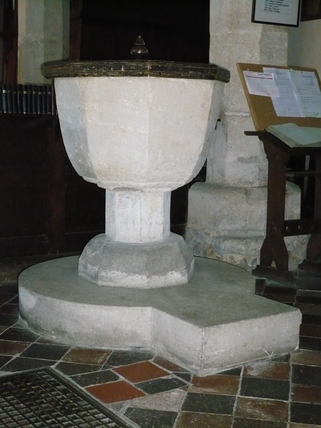 In the south wall of the chancel is a 14th century priest's door. The finial over the door may be from a third seat of the sedilia that is set into the chancel wall. This sedilia is thought to have been from Missenden Abbey. 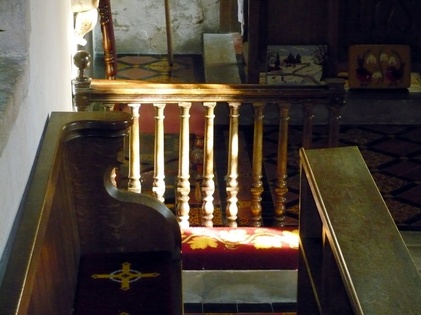 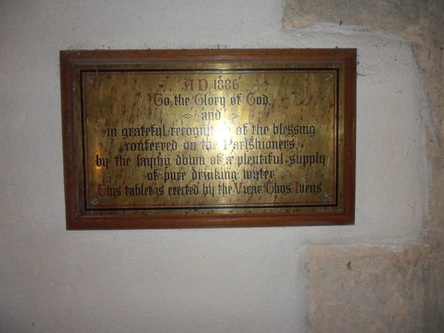 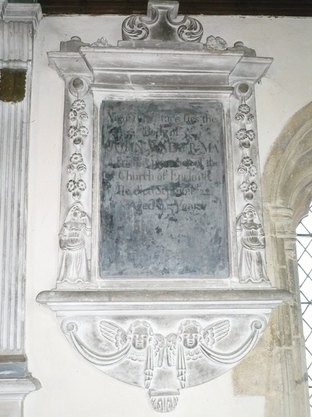 On the outside of the church at the eastern end of the south wall is a scratch or mass dial, distinguishable by a hole in the wall where a dowel pin protruded. On careful observation a scratch mark can be seen on the wall, the significance being that when the shadow of the dowel pin covered the scratch mark it was time for the service to start. 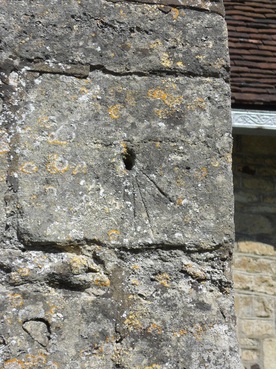 There are some beautiful handmade kneelers in the church, a selection of which appear below. If you have a favourite kneeler that is not included here, please let me know and, if possible, let me have a photograph of it. And if you'd like to have the name of the person who made a particular kneeler added to the caption, again let me know. 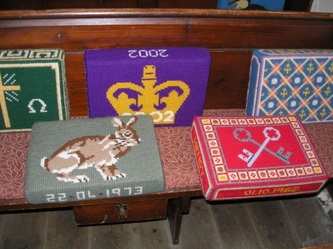 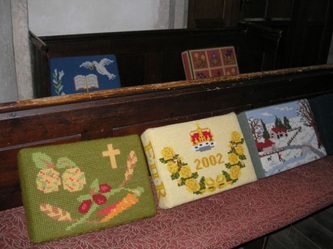 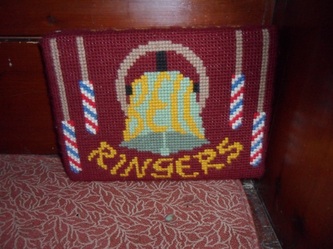 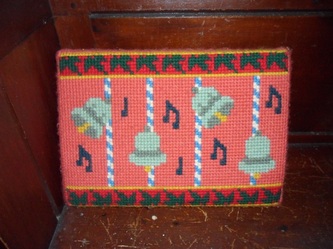 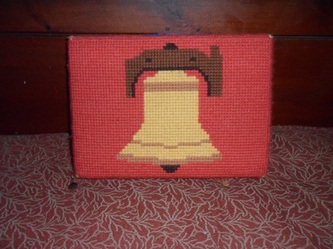 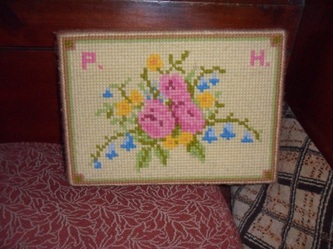 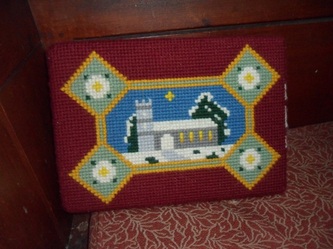 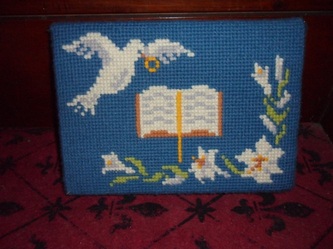 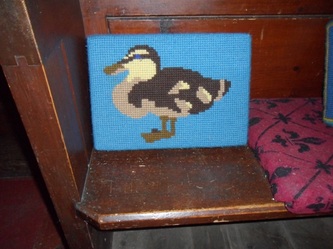 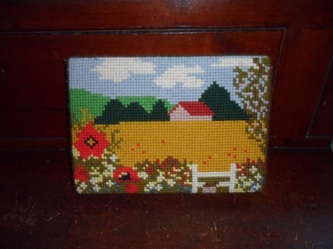 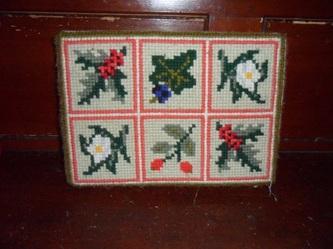 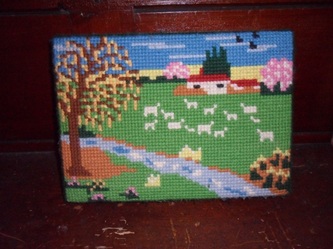 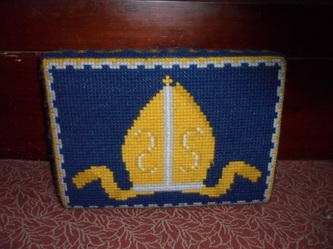 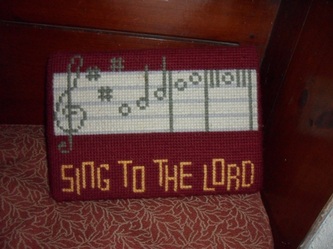 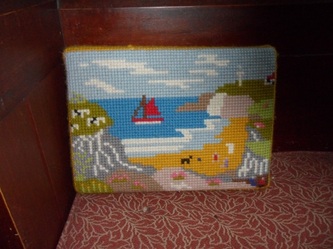 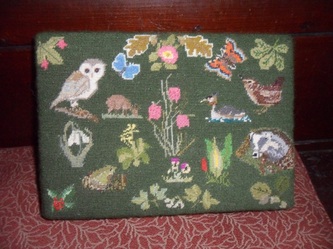 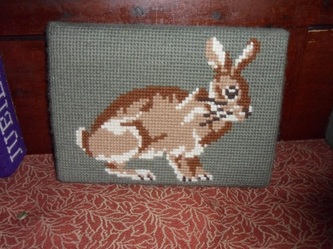