A Sunday school in Piddington was founded in 1818. It became a day school supported by the National Society for Promoting Religious Education in 1858, and a new school building was erected in 1863. In 1925 it was reorganised as a junior and infants' school. It closed in 1967 and is now a private house. 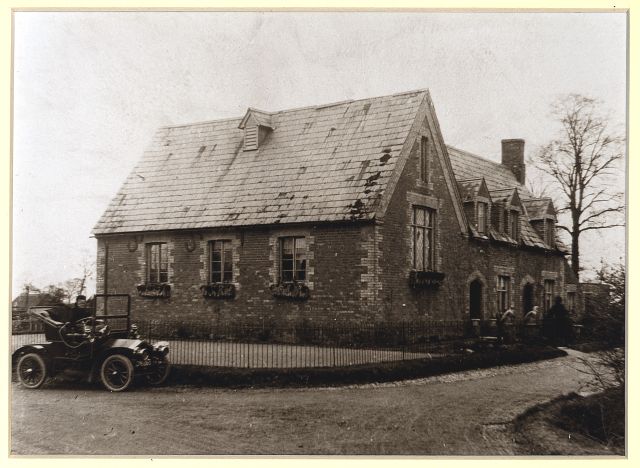 Piddington National School and school house, early 20th century. Built in 1863, it continued as a school until 1967. Five Acres at Ambrosden then became the school for the children of Piddington and still is the catchment school for the village. The school room was then used as a meeting room for the village for smaller events until it was sold in 1977/8, and converted to private houses (photo supplied by Mark Sanders)
In about 1910 the Great Western Railway built a new main line linking Ashendon Junction and King's Sutton to complete a new high-speed route between its termini at London Paddington and Birmingham Snow Hill. The line passes within a few hundred metres of Piddington. The GWR opened a railway station called Brill and Ludgershall just over 1 mile (1.6 km) east of Piddington. British Railways closed the station in 1953 but the railway remains open as part of the Chiltern Main Line.

In 1941 the Bicester Military Railway was built. It connects with the Varsity Line just west of Bicester, runs through the villages of Ambrosden and Arncott and terminates at Piddington, serving various military depots en route. It remains in use today.

The entry for Piddington in Kelly's Directory of 1935 gives some detail of life here at that time.

John Drinkwater (1882–1937) who became one of the Dymock poets and a playwright working with the Birmingham Repertory Theatre, is buried in St Nicholas' churchyard.

Flora Thompson, author of Lark Rise to Candleford, had connections with Piddington, as her grandmother, Martha Wallington, lived in Brown's Piece. Notes on the history of this house were supplied by Margaret Tapper, who lived in this house until her death in 2018. (You can hear more about the Tapper family here. Select Clip 4 from People and Places: Piddington.) In Lark Rise to Candleford, Flora Thompson describes a garland made by the schoolchildren of Juniper Hill (Lark Rise in the books) in the 1880s. It consisted of a bell-shaped frame covered in greenery and flowers. Below is a photograph of just such a garland being paraded through Piddington in the mid 20th century. You can see more photos of Oxfordshire May Garlands here.

The details in 'Manor', 'Church and chapels' and 'Social and economic history' are mostly taken from Wikipedia. Please contact us if you spot any errors in this material, or can provide additional information, particularly about Piddington in the 19th and 20th centuries.

A more detailed history of Piddington is available from British History Online. This consists of material taken from A History of the County of Oxford, Volume 5: Bullingdon Hundred, ed. by, Mary D. Lobel, Victoria County History, 1957.