by Ken Howard with Hazel Coleman 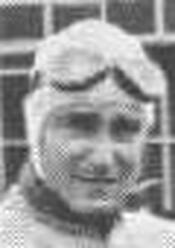 Photo: Leif Snellman, The Golden Era of GP Racing, http://www.kolumbus.fi/leif.snellman/dc.htm
Thomas Pitt Cholmondeley Tapper was a well-known amateur racing driver in the 1930s, an expert skier and a significant figure in the air defence of Britain in the Second World War. He lived with his wife, Margaret, in Brown’s Piece, Piddington.

Tapper was born in Christchurch, New Zealand, and developed an early interest in engines and machines, having come across some English motor magazines.

At 13 he got an advance on his pocket money and for £3 bought a non-working Douglas motorcycle, which he took completely to pieces, rebuilt and got working again. With his dog on the petrol tank, he would ride the Douglas to go fishing – avoiding the police as he was too young to ride the motorcycle legally.

At the age of 14 Tapper moved with his family to the UK, having sold the Douglas for £6 prior to leaving, and at 16 he passed the Cambridge entrance exam. Before taking up his place studying law at Jesus College, he was sent to study for 2 years at Grenoble University in France. Whilst there he became a very experienced and proficient skier, including ski racing, and also became friends with Roger Bushell, who, in the Second World War, led the famous escape from Stalag Luft 3 of over 50 prisoners. His daring exploit was immortalised in the film The Great Escape, but many of the escapees, including Bushell, were recaptured and executed. When he eventually took up his place at Cambridge, Tapper became a member of the university ski team.

In 1931 he went with some friends to Brooklands Race Track to see some motor racing. He had never seen a race before, but was immediately smitten and decided to be a racing driver. He wrote to Ettore Bugatti, offering his services as a driver in their racing team, but never received a reply.
On May 13th 1933, Tapper entered two races each of 10 laps at the very first motor car race held at Donington Park, the first permanent park circuit in England. The rules were that each car had to have a passenger, who was there to inform any overtaking cars that it was clear to do so! The drivers and passengers had to stand on the track opposite their cars and, when given the signal to start, had to run to their cars, get in and set off. His car had no electric starter, so his passenger, Peter Churchill, had to crank it; they were well behind the others. (Churchill, a fellow student at Cambridge, would go on to parachute into France behind enemy lines on many occasions, with the SOE, as a contact with the French resistance in the Second World War. He married ‘Odette’, a famous SOE spy, and they were both captured and imprisoned by the Gestapo, eventually returning to Britain after the war’s end.) In the first race at Donington Park they finished second, but mechanical problems meant they failed to start in the second race. Earl Howe won a 20-lap race at an average speed of 60.88 mph, in a 2.3 litre Bugatti.

In June 1935, Tapper raced at the famous 15-mile Nürburgring track. He eventually collected his starting money, which was considerable, but only 10 Reichsmarks were allowed to be taken out of Germany. The cash transaction was supervised by a high-ranking Nazi. Tapper persuaded him that he needed cash to travel around Germany as a tourist. You could ask for it to be paid into a bank account for half its cash value. Tapper needed cash, which he eventually got, changed his money up into large notes, and rolled them into a grease ball and put them in the wheel hubs of his Bugatti, which he was towing. He decided to try crossing the border from a minor road, and eventually passed through the German customs post, having got his papers signed and with his money.

On August 3rd 1936, he entered the Limerick International Motor Race with a co-driver named Miss (Eileen) Ellison. They drove a Maserati, alternating the driving, with Miss Ellison driving half the race, which lasted 2 hours 9 minutes and 56 seconds. The winner was an MG with an average speed of 57.4 mph. On the first lap the 22-year-old Duke of Grafton was killed, but the race continued.

Eileen Ellison is an interesting figure in her own right, as one of the first and most impressive female racing drivers. It was through her brother Tony's interest in motorsport that Ellison first became interested in racing in the late 1920s, and Tony was often the mechanic when she raced. Her main racing achievement came in 1932 when she won the Duchess of York's race for women drivers at Brooklands, beating Kay Petre, arguably the most famous female racing driver at that time, who came second. Ellison shared cars with Tapper over a number of years, travelling the world as his racing partner, and the Bugatti pictured below carried both their names on its body. One of their trips was by ship to South Africa for the SA Grand Prix, a voyage that took over 4 weeks. In 1940 Ellison married Squadron Leader Brian ‘Sandy’ Lane DFC, a Battle of Britain Spitfire pilot. He was shot down, aged 25, in the summer of 1942 over the North Sea and his body was never found. She moved to South Africa, where she lived for the remainder of her life, and died in Jersey in 1967 aged 57.

In 1935, Tapper entered the German Grand Prix, having purchased from Lord Howe an almost new Maserati for £300. This car could reach 170 mph. Hitler was at this event along with around 350,000 spectators, but Tapper and a few others refused to take the Nazi salute. He was advised by some German friends not to race as they would crash him out, however he did so and finished sixth. He was given a silver goblet by Hitler but refused to speak to him. Tapper was then 26 years old.

In late 1936 he was offered a trial to be a Mercedes-Benz team driver, but owing to bad weather and other delays he arrived two days late, and the Mercedes-Benz contingent had gone home.

Then in early 1937, skiing in a snow storm as one of the four-man British team at the world championships in Chamonix, he crashed and was hospitalised.
On July 10th 1937, at Brooklands, he took part in the last race of his career, finishing third. Also taking part in this race was Sir Malcolm Campbell, driving a Type 57 Bugatti.

Having given up motor racing, Tapper worked at Lloyds of London. He was friendly with Winston Churchill, who was then a back bencher and who believed that problems with Germany would lead to a war. The Civil Air Guard Scheme was a Government initiative to help increase the number of trained pilots in Britain. Tapper and a friend, Dennis Fox, decided to take advantage of the scheme by setting up their own Civil Air Guard School on their own airfield. So in 1939 they bought some land in Haddenham that at had previously had been an airfield but was now unused, and set up Bucks & North London Flying Club to run it. All civilian flying was ‘officially’ stopped in Britain on August 31st 1939 and the airfield was requisitioned by the Air Ministry in November. 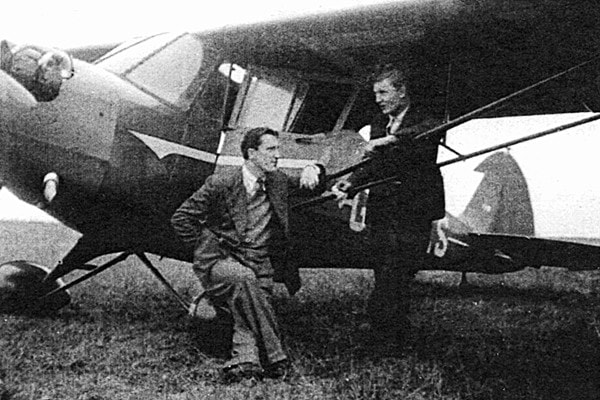 In 1941 Haddenham Airfield became home to the Glider Training School, which had its HQ at 8 Church Street, Thame, and its Officers’ Mess at The Swan Hotel in Upper High Street. This was the beginning of what became known as ‘RAF Thame’, which closed in 1946 and is now a new housng development.*

Late in 1942, the Glider Training School moved out, and a new training school for the Air Transport Auxiliary (ATA) was set up on the airfield. The ATA was a totally civilian operation with the sole job of delivering aircraft around the country from factories or maintenance facilities to the airfields where they were needed. The ATA recruited pilots who were considered to be unsuitable for either the RAF or the Fleet Air Arm by reason of age, fitness or gender. Tapper had been seriously injured in a car accident early in 1940 and failed the RAF medical but he was able to fly for the ATA.

Some ATA recruits were civilian pilots before the war, some were seconded directly from the RAF, some had no flying experience at all. They also took pilots from neutral countries – representatives of 28 countries flew with them. Most notably, the ATA allowed women pilots to ferry aircraft – 166 of them in all, one in eight of all ATA pilots. One of the women pilots was Margaret Watson, who Tapper met at Haddenham and married in 1945.

In 1953 he wrote a book (Amateur Racing Driver) about his racing exploits. At that time, the Tappers lived in Aylesbury, but subsequently moved to Piddington. In 1986 he gave an interview to BBC Radio Oxford, which you can hear here. Thomas Pitt Cholmondeley Tapper died in 2001, and his wife, Margaret, died in Piddington in December 2018.

Tapper was the first of many people from the Piddington and Bicester area involved in motor racing – a tradition that continues today.

* A comprehensive history of RAF Haddenham/Thame can be found on Peter Chamberlain's website, Haddenham Airfield: A history of a small Buckinghamshire airfield, www.haddenhamairfieldhistory.co.uk/index.htm.