Videos of various events in the village supplied by villagers. Thanks to everyone for allowing them to be shared.

The Piddersnake took up residence outside the village hall during the Covid-19 lockdown, encouraged by his friends Athena and Kirsty Walker, who thought villagers might like to help him to grow by adding their own hand-painted stones. In true Piddington style, he grew and kept on growing, with a selection of stones that are sweet, funny, quirky and beautiful - but always heartfelt. Here he is on 26 July 2020. Villagers have expressed a wish to preserve him when he's reached his final size, as a memory of this unpecedented time and the amazing community spirit in our village.

Piddington in the mid-twentieth century

This film sequence is made up of clips from various home movies of Piddington residents in what appears to be the 1950s or 1960s. It shows fetes and other village events, including children carrying a May Garland through the village. Oxfordshire May Garlands had a very particular design, consisting of a bell-shaped frame covered in greenery and flowers, as described in Flora Thompson's book Lark Rise to Candleford. You can see more photos of Oxfordshire May Garlands here.

The film was brought to a Nostalgia Evening in the village hall several years ago, and information about it is scanty. If you can identify any of the people in it, I'd be very grateful to hear from you at hazel@piddingtonvillageoxfordshire.org.uk.

I am very grateful for the following information, supplied by Heather Thomas, in March 2020.

I know that these were all filmed on cine by Arthur Gatehouse, who was vicar between 1947 and 1976. His wife, Stella, features quite frequently!

The old couple in front of the cottage I think were Mr and Mrs Marlow, and that is the cottage where Marlows is now.

Quite a lot was filmed at the fetes held in the vicarage garden. There was always Fancy Dress and it looks like a Bonny Baby competition too!

The outings were for the Sunday school (Wicksteed Park) and I would imagine that the one that seemed to consist mainly of ladies was linked to the Mothers Union. "

Heather identified several of the people who feature in the film, and I have since been contacted by Len Ash, who spotted himself in it and has supplied several more names. The time shown in the list below indicates the point in the film (in minutes and seconds) at which the person is seen. As you see, there are a few queries, and several people remain unidentified, so if you can supply any more information, that would be great. Just contact me. 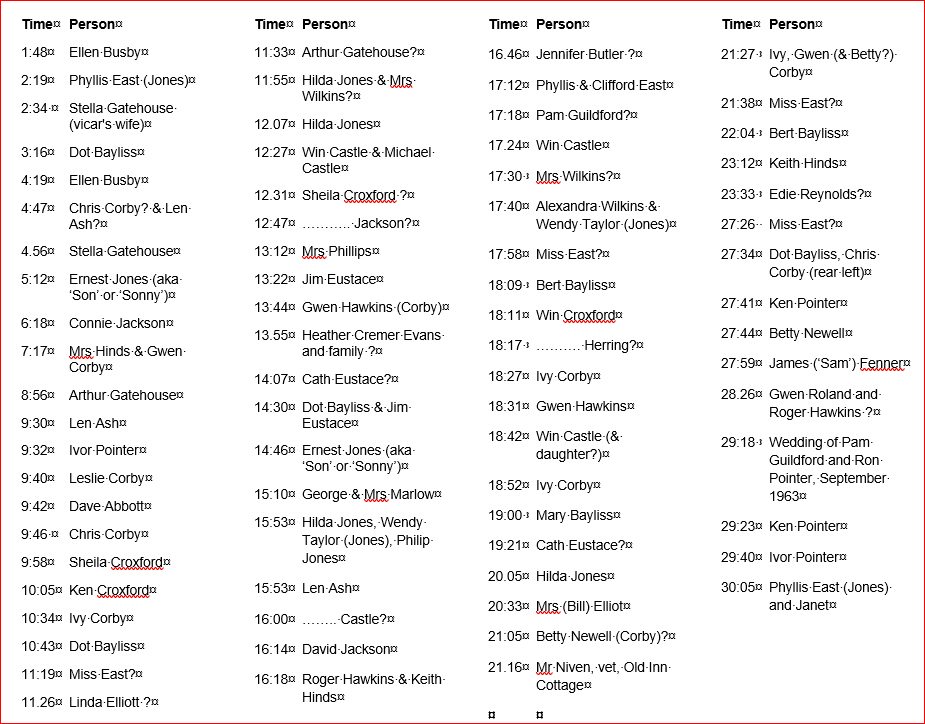 The Pantry - Behind the Scenes, March 2018
Video: Tirion Ashton