Although The Pantry team has stopped holding regular markets, the success of the Coffee Shop as a much-needed daytime hub for villagers to catch up with friends and neighbours led to the formation of a monthly Book Swap Coffee Morning in the village hall. It's completely free, with coffee and biscuits provided by The Pantry, so bring along a book to swap or just come along and choose something to borrow from the selection.

Having welcomed the public to the first market in December 2012, the team behind The Pantry has decided that the time has come to hang up their aprons. It is fitting that the community market finishes as it began – with a Christmas celebration.

Over the last 7 years the group has held some 25 markets, which have raised over £12,000 for village causes. Apart from fundraising, the aim was to create a regular community event for Piddington residents and to promote local talent and business (particularly in the food sector).

From the outset, the market has been supported by a group of fantastic volunteers, organised by Maggie Pearce, who turn their hand to so many tasks: they work in the Coffee Shop, serving or clearing tables and generally keeping things tidy, help with sales in the General Store, help in setting up and taking down the market, and many other jobs needed to keep things running smoothly.

An important part of The Pantry has been the St Nicholas’ Church fundraising team, who not only produced a wonderful selection of homemade cakes and bakes for every one of the markets, but also expanded their range, selling crafts and seasonal produce, raising much-needed funds for St Nicholas’ Church.

The markets have been hugely supportive of small local businesses over the years, even going ‘on the road’ on more than one occasion! Locally produced beer, wine, cheese, meat, bread, chutneys, jams, fruit and veg have all been promoted, and since 2016 the markets were even able to offer visitors Piddington cider and apple juice, both made only from apples grown in the village. Local craftspeople, kitchen table entrepreneurs and artists have also been an important feature, giving each market its own identity.

The Coffee Shop was an immediate success, with legendary queues at every market for bacon baps and homemade cakes. This subsequently led to the formation of a monthly Book Swap Coffee Morning in the village hall sponsored by The Pantry, which started earlier this year and creates a much-needed daytime hub for villagers to catch up with friends and neighbours.

To date, the markets have raised over £12,000, generated by profits from the Coffee Shop, General Store and Beer Stall, stallholders’ fees, raffles and secondhand book sales. So far £8,875 has been donated or committed to village causes, in particular the village hall’s refurbishment programme, including its new kitchen, extension and upcoming heating overhaul. St Nicholas’s Church has also received a commitment of £3000 towards the building of a servery and toilet, and grants have also been given towards the Piddington Fitness Trail at the playing field and a new children’s play area at the rear of the village hall (where work is due to start shortly). The Pantry also sponsored the ploughman’s lunch on Apple Day and the purchase of the original village defibrillator in 2015.

The last market will be held on Saturday 7th December (10 – 2pm) and will kick start Piddington’s Christmas season. Please support the event and help make it the best one yet!

The Pantry group would like to thank all its fantastic volunteers and the stallholders who have supported each of the markets. As much as The Pantry was a vehicle for fundraising, each market was also about fun and friendship.

After the Christmas event, the balance of fund money will be held in trust by the group, ready to be donated to suitable new village projects as they come to its attention.

What an adventure it has been …

The Pantry Coffee Shop has always been the heart of the markets, and we know how much people appreciate having a place in the village to drop by and have a chat and enjoy a cuppa.

We decided to open the village hall for coffee every month - albeit on a smaller scale than the Pantry Coffee Shop - and also make it a hub for swapping books. The first Book Swap Coffee Morning was held on 21st March 2019, and has been running successfully since then.

The coffee and refreshments are free, courtesy of The Pantry, and, in addition to books brought to the coffee morning on the day, there are books donated by villagers and other users of the hall, so the stock is constantly refreshed.

If you're around and fancy a break, drop into the next Book Swap Coffee Morning. Please note, however, that because the hall will be closed in November for various building/maintenance projects, the next one will be in January 2020. Dates will be advertised.


Any changes will be posted in The Pantry blog.

We look forward to seeing you!

The launch of The Pantry was featured in the Bicester Advertiser, and the press has also marked some significant milestones. We hope it gives all our fantastic volunteers and stallholders a great boost to have their hard work and achievement recognised in this way. 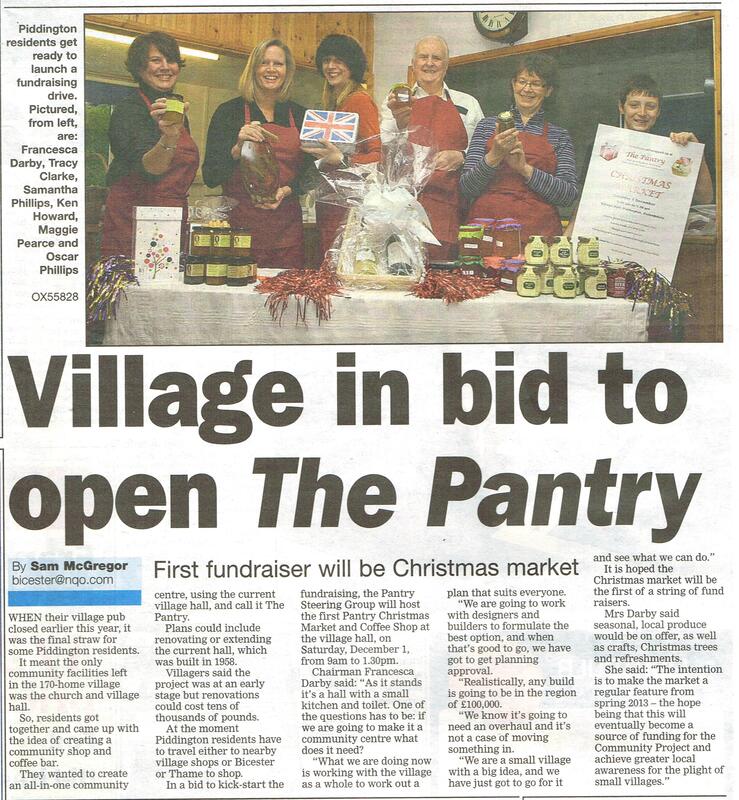 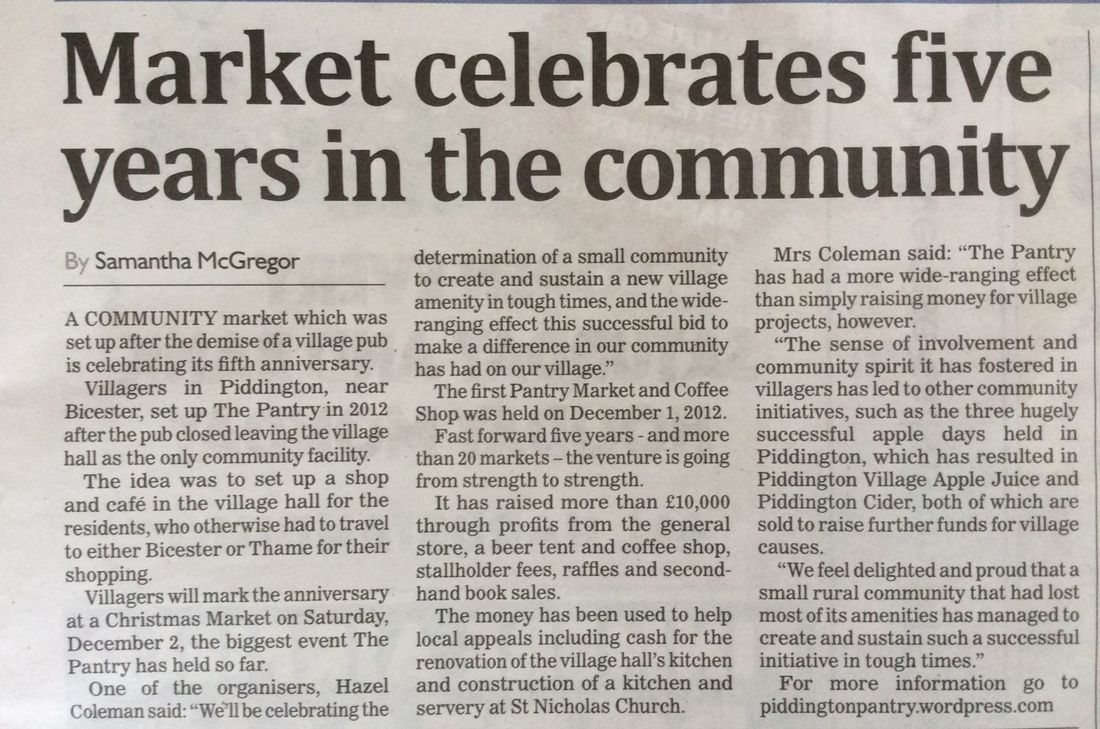 From the Oxfordshire Guardian, 15 November 2017 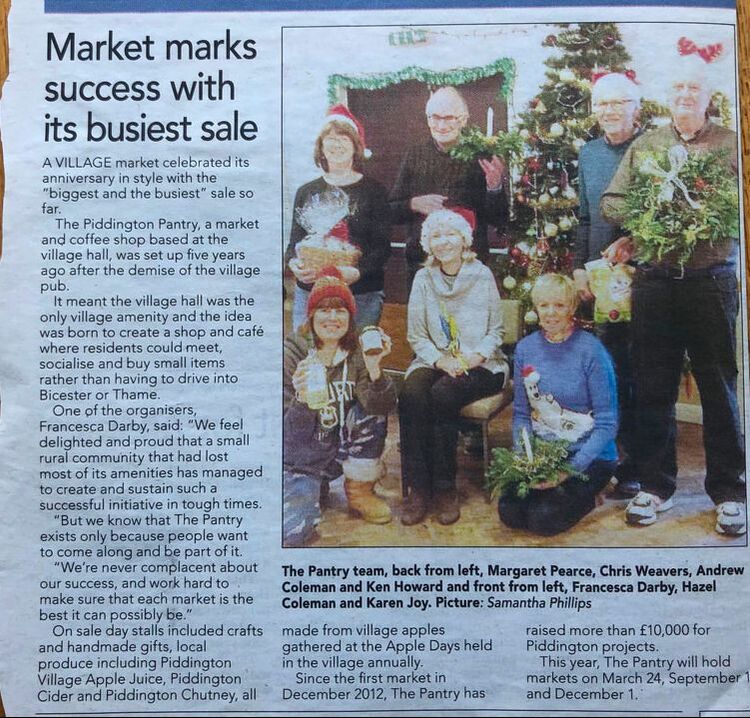 As part of The Pantry's celebrations of its 5th anniversary, we sent the press release below to the local media. I hope you agree we have something worth shouting about - see you at the Christmas Market!

CHRISTMAS MARKET WILL BE OUR FIFTH ANNIVERSARY

The Pantry Christmas Market to be held on Saturday 2nd December in Piddington, a small village near Bicester, will mark the 5th anniversary of this successful venture, and will be our biggest so far. We’ll be celebrating the determination of a small community to create and sustain a new village amenity in tough times, and the wide-ranging effect this successful bid to make a difference in our community has had on our village.

The first Pantry Market and Coffee Shop was held in the village hall at Piddington, a small community near Bicester, on Saturday 1st December 2012. In an article published in the Bicester Advertiser (29th November 2012) Francesca Darby, one of the organisers, stated that “The intention is to make the market a regular feature … the hope being that this will eventually become a source of funding … and achieve greater local awareness for the plight of small villages.” At the time, the village had just lost its pub.

Fast forward five years (and over 20 markets) and we are still going strong, the organising group and fantastic volunteers still include the same faces and our stall holders continue to give their support.

Our original aim was to promote small local businesses and fundraise for a village shop. However, after village consultation, it was apparent that the latter aim lacked real viability. Nevertheless, the group believed that other village causes could be helped.

The Pantry has so far raised over £10,000, generated by profits from the general store, beer tent and coffee shop, stallholder fees, raffles and secondhand book sales. At each market, we have offered a free table to St Nicholas Church, where volunteers sell homemade cakes to raise funds for essential work on the building.

This summer The Pantry offered a donation of £3000 each to the committee of the village hall, towards the renovation of its kitchen, and to St Nicholas Church project group, for their plans to construct a kitchen/servery. We hope that by this time next year one if not both projects will be completed.

The Pantry has had a more wide-ranging effect than simply raising money for village projects, however. The sense of involvement and community spirit it has fostered in villagers has led to other community initiatives, such as the three hugely successful Apple Days held in Piddington, which has resulted in Piddington Village Apple Juice and Piddington Cider, both of which are sold to raise further funds for village causes. (See www.piddingtonvillageoxfordshire.org.uk/piddington-apple-day.html)

We feel delighted and proud that a small rural community that had lost most of its amenities has managed to create and sustain such a successful initiative in tough times. The market exists through community patronage. While The Pantry blog (piddingtonpantry.wordpress.com) has a worldwide following, it is our visitors who create the special atmosphere on the day.

The Christmas Pantry will be held on SATURDAY 2nd DECEMBER, 10am to 2pm, in the village hall, Piddington, OX25 1PU, and will mark our fifth anniversary. It is due to be the biggest yet. Put the date in the diary and tell your friends!

In the meantime, thank you for your continued support.

Getting The Pantry (Piddington's seasonal community market and coffee shop) up and running is no small undertaking, and the success of each one depends on the efforts of a number of people who have volunteered to help with various jobs that need doing. We now have a gratifyingly large group of people we can call on to help, but we can always do with more.

Our volunteers turn their hand to many things - e.g. setting up the stalls and marquee beforehand, baking for the coffee shop, serving behind the counter or on the General Store, clearing away afterwards. People really seem to enjoy volunteering at the market, and their friendly enthusiasm helps to make it such an enjoyable event.

As a volunteer on market day itself, you won’t need to be around for the whole time – just an hour or two when it’s most convenient for you would be a huge help. 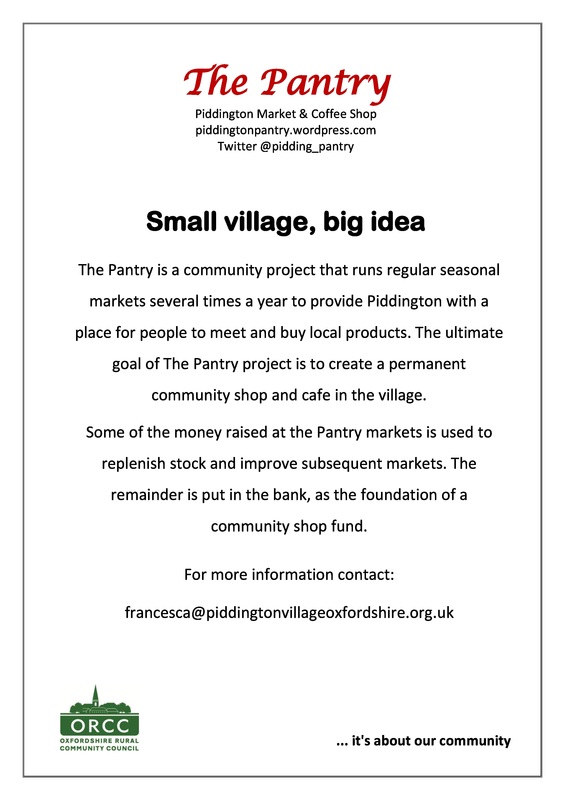 You may be aware that we have our own tote bags, printed with The Pantry logo, for sale at the very reasonable price of £2. If you'd like to buy one, please contact Francesca. 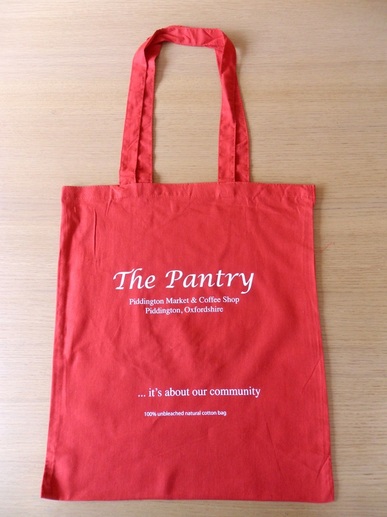 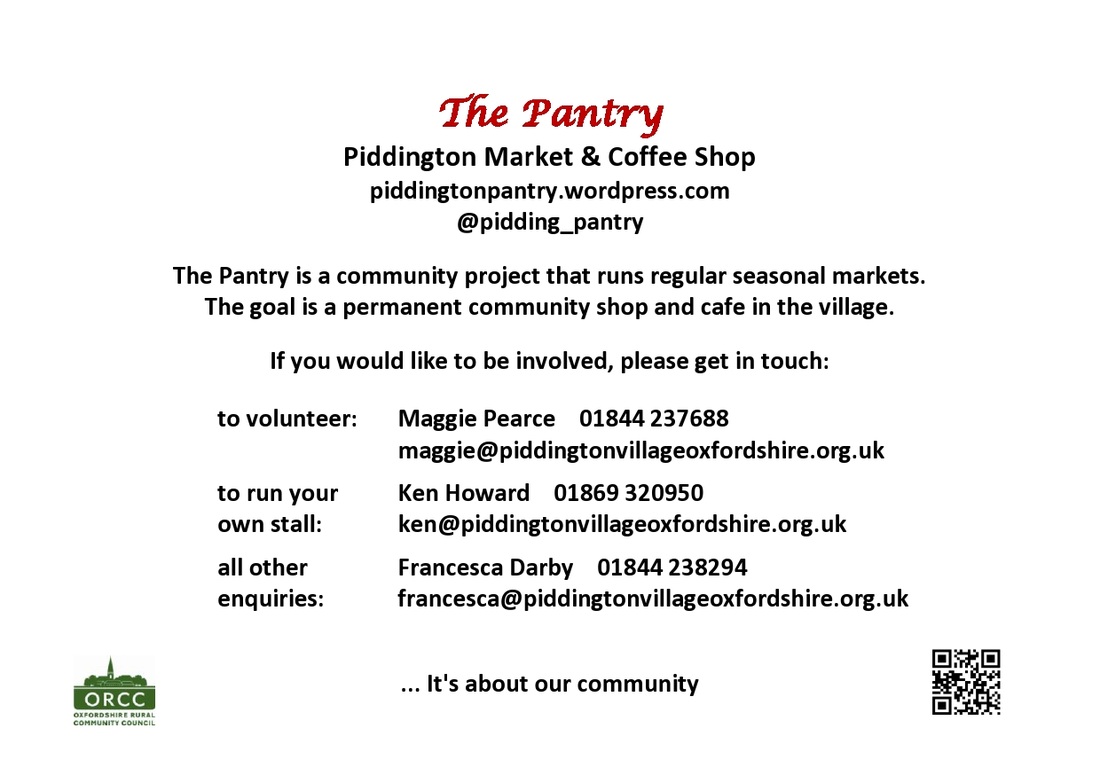